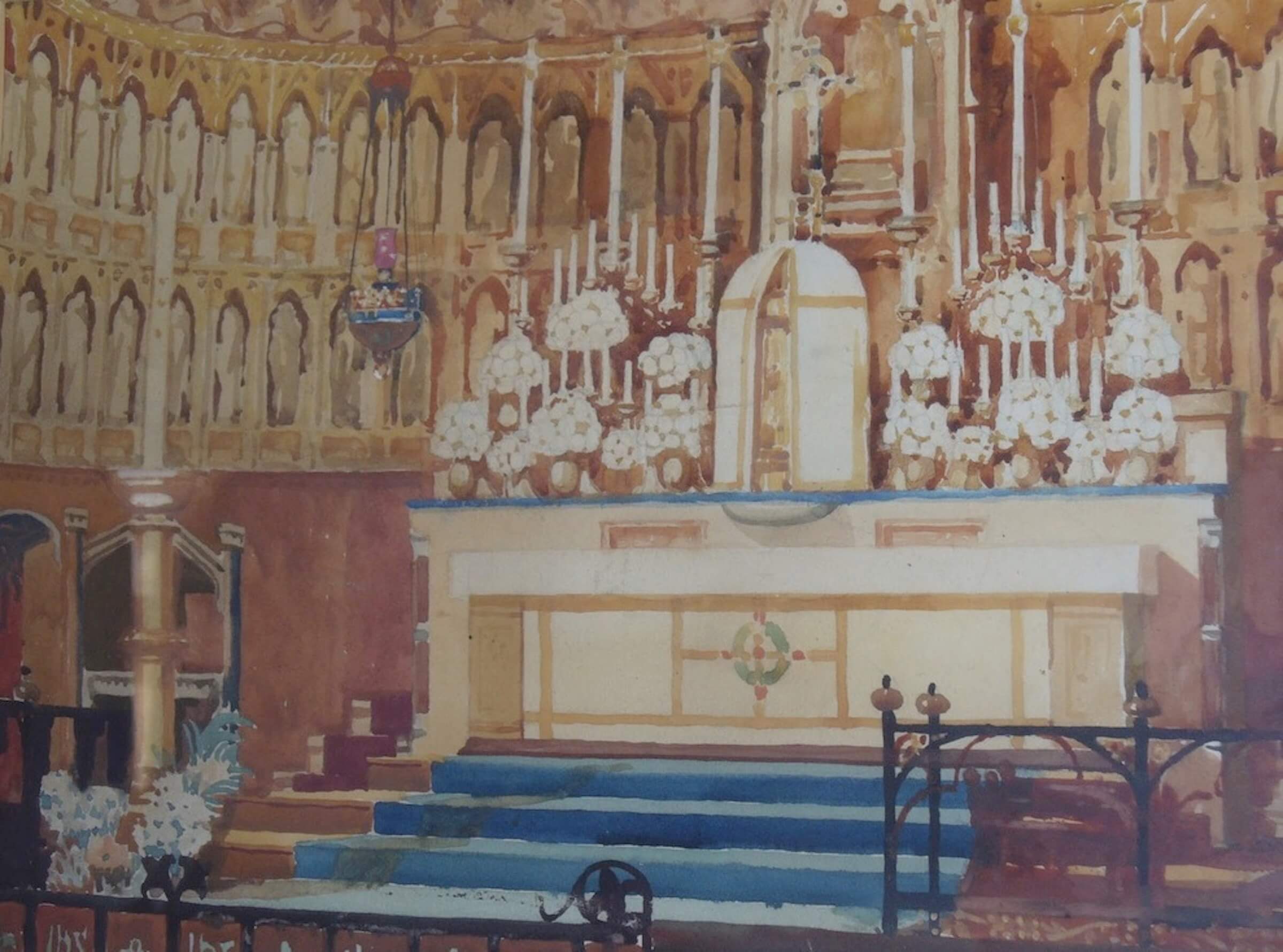 A litany in stone

St Aloysius’ Catholic Church was built in 1875 to serve the population of Oxford.

‘St Aloysius of the Church of Rome:
Its incense, reliquaries, brass and lights
Made all seem plain and trivial back at school.’
—John Betjeman, Summoned by Bells

For the first 100 or so years of its existence, St Aloysius was served by the Jesuit Fathers, successors of those who had kept the Catholic faith alive in Oxford during the long years of persecution. After the Jesuits left in 1981, priests of the Archdiocese of Birmingham looked after the parish until 1990, when St John Henry Newman’s dream was at last fulfilled and the church was entrusted to the Fathers of the Oratory.

The Catholic mission in Oxford begun by the Jesuits was centred on the little temporary chapel of St Ignatius (built 1793) on St Clement’s. Attempts had been made to purchase a site on St Aldate’s for a new Church, and Newman had purchased land (now Wellington Square) on which to found an Oratory. Both ventures were to fall victim to unsuitable circumstances and to remain unrealised. By 1871, the buildings were found to be inconveniently situated and inadequate for the needs of the congregation, and so the decision was taken to build a new church on the Woodstock Road.

A number of sites were almost purchased, but seemed to slip through the grasp of the parish priest, Fr James Corry. A design for a large decorated church with fan-vaulting and a large tower was submitted by Hansom, but was rejected as being too much of a copy of New College Chapel and deemed too expensive to erect.

In March 1871 a legacy of £7000 was left by Baroness Weld. The site was purchased, a simplified design of stone and yellow brick was commissioned from Hansom, and the foundation stone laid on 20 May 1874 by Bishop Ullathorne, attended by a huge crowd, among whom were such individuals of note as Oscar Wilde and David Hunter Blair. The Church was solemnly opened by Ullathorne on 23 November 1875, with Cardinal Manning preaching the homily.

In November 1876 Lord Bute gave £1000 for the cost of the high altar, and in 1878 the construction of the reredos began, its niches being filled with statues of saints gradually over the coming years. The Lady Chapel was decorated by the gift of a Miss M Fletcher and an altar of copper, silver and enamels by Morris & Co was installed in the same chapel. At the same time, the statue of the Sacred Heart by Mayer & Co of Munich was given by Miss L Kirner, and in 1902 the chapel was decorated by Gabriel Pippet. Various other statues and devotional images were installed in the church as and when benefactors made this possible. On 3 May 1908 the Relic Chapel, endowed by Mr Hartwell de la Garde Grissell was completed and solemnly blessed with the bodies of the martyr saints Pacificus and Felix installed there.

Fr Cyril Martindale, S.J., in his history of Catholics in Oxford, notes that in 1902 the church was decorated with “pale marble, gilding and colour...and electric light was well installed throughout.” The murals by Pippet of scenes from the life of St Aloysius were painted in the sanctuary where stained glass was also installed in the windows.

During the course of the 20th century, the church would gradually lose much of its original splendour, as maintenance work fell behind and damaged decoration was covered over. The sanctuary was reconfigured according to the latest fashions in the 1950s, and the high altar simplified and moved forward.

Beginning in 2007, the enormous task of renovating and restoring the church was begun by the Fathers of the Oratory. The Lady Chapel and Relic Chapel have both been fully restored and redecorated in 2007 and 2009. In 2008–9, major structural restoration was carried out in the sanctuary, which now waits to be completed with the rest of the church. In 2019, a new altar for the Sacred Heart chapel was installed.