Rosary on the Isis 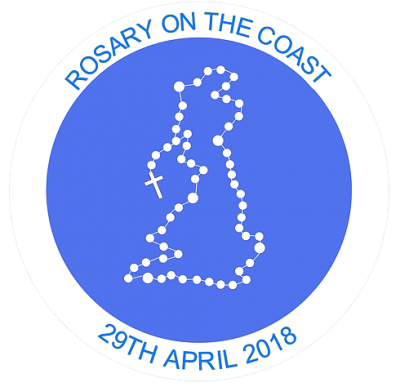 Oxford is about as far from the coast as one can be in these islands. However, as many people won't be able to travel to the seaside on 29th April, we shall pray the rosary in our church at 3pm on that day in union with all those who take part in this prayer for faith, life and peace in the British Isles. The preparatory prayers will begin at 2.45pm.

The website Rosary on the Coast has the following information about this event:

Recently the faithful of Poland and Ireland have responded to what they sense as a movement of the Holy Spirit to gather around the coasts of their nations and pray to Jesus, the Divine Mercy, for a renewal of faith and respect for human life through the powerful intercession of Our Lady of the Rosary.  Having witnessed this, a number of the lay faithful in the British Isles - England, Scotland, Wales and their isles - have felt the same inspiration and urge to respond.

They are hoping for us to have our own national Rosary on the Coast for Faith, Life and Peace in the British Isles and are calling their brothers and sisters to such a day of Prayer and Pilgrimage on Sunday 29 April 2018 at 3pm, fifth Sunday of Easter.

This is an opportunity to pray for a re-flourishing of faith across the British Isles as a means of preparing for a New Spring Time within the Church, so that we Christians of these lands might spread the Gospel in its fullness in a renewed and joyous way. We hope that Rosary on the Coast will bring from heaven the grace of renewed evangelistic outreach and zeal as we further the work of the New Evangelisation.

An adventure of Evangelisation

“Our world is engaged in a fraught struggle over the meaning of the human person.  Aggressively secular anthropologies insist that nothing is really true or given in human nature, and the only lasting good for each human person comes about when they can choose everything about their identity from its very source.  It brings a radically new meaning to the idea of pro-choice because it seeks to lay hold on the very prerogatives of Creation itself.  Against this our Christian anthropology battles on proposing that God, in His loving plan of Creation, has already given us a nature that is best for us, so that our meaning and happiness are integrally linked to discovering, rather than inventing, the truth of who we are, and so entering its path to real dignity, freedom and peace.  Since this task is now, in our times, an adventure of evangelisation we need God’s supernatural assistance in grace and mercy, which the laity are beginning to cry out for in initiatives like the Rosary on the Coast, asking the Woman who was content to be the handmaid of God’s plan to be their intercessor and guide.” Bishop John Keenan

Sunday April 29th 2018, the 5th Sunday of Easter, is both providentially the Feast of Our Lady of Faith & St. Catherine of Siena, who is one of the co patrons of Europe. This frames our initiative in the wider context of re Christianising our great continent.

Context of Prayer for the Sanctity of the Human Person

In our country 2017 marked the fiftieth anniversary of the Abortion Act, which came into effect on 27 April 1968, and which has overseen the killing of nearly nine million unborn children.  Marking this anniversary Lord Alton identified our country, half a century on, as ‘the geopolitical epicentre of the culture of death’ in our times.   Yet the consciousness of our citizens is in denial, unable to fathom and grasp the enormity of this wound to our society.

There is a great unease in peoples’ hearts as helplessly they watch daily the news channels and their incessant litany of bad news and of horrors unthought-of … degeneration, disaster and war everywhere.

We live in times of unprecedented global upheaval with millions of peoples being displaced. The suffering of peoples is everywhere. How are we all to respond with both generosity and compassion? The contemporary culture seems to be devoid of hope and our initiative seeks through prayer to awaken HOPE.

The religious response of people of Faith is to turn to Jesus and to appeal to Our Lady as Queen of Peace, who witnessed the most terrible of evil of all at Calvary and whose silent sacrifice, in union with Her Son’s, saw that same evil defeated and lasting grace inaugurated. It is the Lord’s triumph over death, which transforms the hopelessness of the tomb into the joy of Easter Resurrection.  With Christ at the heart of our lives we can dare to HOPE for change!

Are we prepared to stand at the foot of the Cross-of the Calvary of our time and in fervent prayer, plead for the Mercy of God to descend and for the precious blood of Jesus to cleanse us and make way for the healing and purifying rays of Divine Mercy to envelop us all and prepare the way for God’s reign of blessing and peace throughout the world?

This is what Rosary on the Coast is all about.

Our people worry and watch on before the unchecked moral decline of our society amid an all too real Gospel context of threats of wars, terrorist attacks and natural disasters.  It arouses in them a new urgency to find some higher, more supernatural response, one that will adequately engage and overcome the dark strongholds of our world.   Our faith invites us not to be blind to the reality of evil and the spirit of Satan that often lurks behind geo-political problems, seeking to hold humanity in his primordial bondage.

In the Light of Scripture

The books of Joshua and Daniel help us understand the spiritual context of what we are about, and offer us some lessons in the shape of a faith-filled response.  God’s people are to pray to Him to bring down the strongholds of evil that the walls of hatred of sin and division, of disunity in families, communities and among nations might come tumbling down.

The Lord gives us every encouragement to adopt this path:  If my people who bear my name humble themselves, and pray and seek my presence and turn from their wicked ways, I myself will hear from heaven and forgive their sins and restore their land.

From the Cross Jesus gave us His Mother, Mary, as the Mother of the Church, to intercede before the throne of God for us, His People, who undertake such missions of prayer, penance and reparation, for our own sins and for the sins of the world, for our countries and their islands.

This mission includes an invitation to the Sacrament of Confession.

The Rosary has been given to us as a powerful weapon to fight the darkness of our times and to pray for Peace in our world.  The saints have called Our Lady the terror of the demons, and Jesus, Our Lord and Saviour, has entrusted each person and our world to Her Motherly care. Our faith teaches us that it is through the supernatural movement of grace and prayer, invoking the powerful intercession of Our Lady, that evil is brought down, and goodness & peace seem to be restored among peoples and nations.

A Time for Prayer

Jesus taught His disciples that some evils can be cast out only by prayer and fasting. Today’s evils are no different and this National Day of Prayer through Rosary on the Coast can provide a privileged moment for moving and gathering the faithful throughout the Church in England, Wales and Scotland to such means of ridding ourselves of the present threats to faith, the dignity of the human person and to peace. It is a call to prayer in intercession for peace, for the conversion of our isles and for a re-flourishing of our Faith, so that God’s Commandments can be honoured and upheld and that all human life can be respected from conception to natural death.