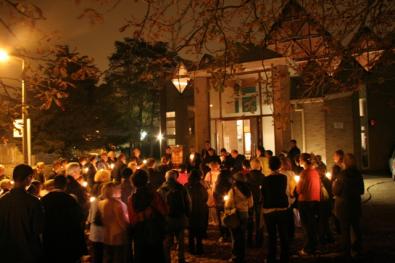 9th October was our Cardinal's first liturgical feast day. There was a whole weekend of events in Oxford, all of which were attended by large numbers of people.

The Night Walk (pictured above) takes place each year on the evening of 8th October, from the Oratory to the College at Littlemore. It commemorates Blessed Dominic Barberi's arrival to receive Mr Newman into the "one fold of the Redeemer" on 8th October 1845.

On Saturday 9th October there was a Mass in honour of Blessed John Henry in the Parish Church at Littlemore, and then in the evening, Nigel Cooke of the Royal Shakespeare Company read Newman's sermon "The Cross of Christ the Measure of the World" to an appreciative congregation in the University Church of St Mary the Virgin, where Blessed John Henry was the vicar.

Finally, on Sunday 10th October, the feast was transferred at the Oratory. There was veneration of the relic after all Masses, and Bishop John Arnold celebrated the Solemn Mass.