Yesterday, to celebrate the Diamond Jubilee of Her Majesty the Queen, the Solemn Mass was offered for the Queen. Mozart's Coronation Mass was sung, accompanied by instruments, and Sir Hubert Parry's Coronation Anthem "I was Glad" was sung at the Offertory.

After Mass we joined our friends from St Giles' Church for a splendid Jubilee Party in their church hall. 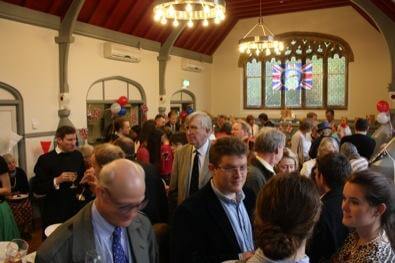 A toast was proposed to the Queen and two verses of the National Anthem were sung. 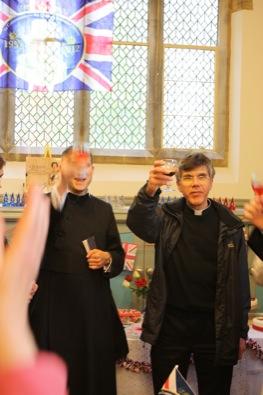 Our thanks go to the Vicar of St Giles', the Rev. Dr Andrew Bunch, and to the St Giles' congregation for welcoming us so warmly.

There was a competition for the best 1950s outfits, with prizes awarded.

Fr Richard had clearly made the most effort of any of the male entrants: he had borrowed some Jesuit "wings" from Campion Hall, slicked down his hair, and appeared as a 1950s Jesuit. 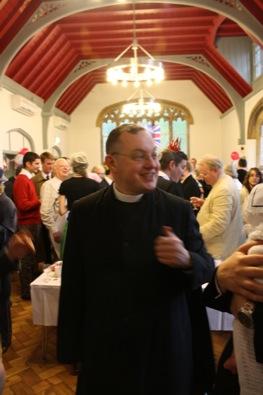 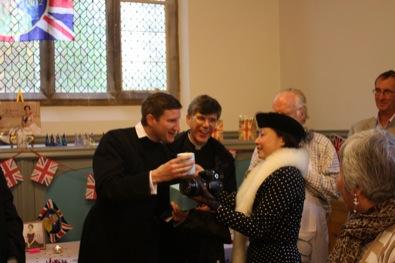 And in first place was Miss Tessa Caldecott: 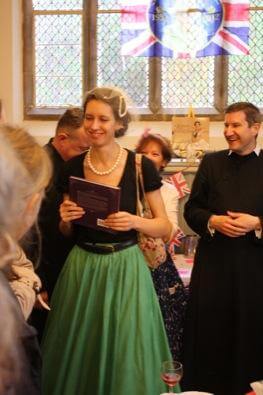 Despite the wet weather, a good time was had by all. 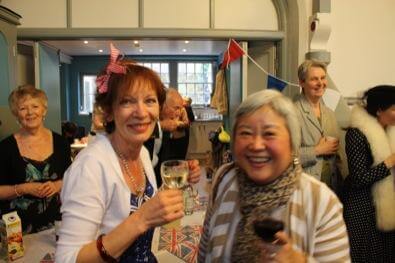 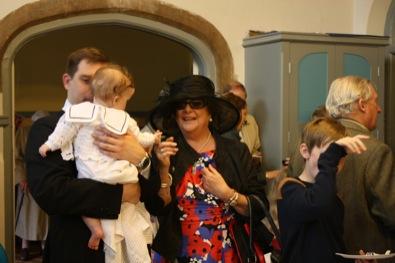 Trinity Sunday - Diamond Jubilee of Her Majesty the Queen

It was on the eve of Coronation Day that the first ever evening Mass was celebrated in this church and in other churches up and down the kingdom, as Catholics came together to pray for their new Sovereign. Sixty years on, on this Diamond Jubilee of Her Majesty the Queen, we come together again in a spirit of tremendous thanksgiving to Almighty God that our prayers have been so richly answered in a monarch who has been so steadfast and faithful, who is so public an example of a deep Christian faith and who has never wavered from the promise she made on her twenty-first birthday: "I declare before you all that my whole life whether it be long or short shall be devoted to your service"

Most of us here were born during the reign of Queen Elizabeth II, and perhaps we are so used to her dependable commitment to duty and service that we take it for granted. It is worth remembering that these virtues in rulers are comparatively rare. There have been far more Stalins, Maos and Elizabeth Tudors than there have been the likes of Edward the Confessor or Baudouin King of the Belgians. Even the greatest kings of the Old Testament were far from ideal: David famously had Uriah the Hittite killed so that he might seduce Bathsheba, and Solomon in his old age was turned away from true religion by his foreign wives and whored after strange gods. Indeed the great majority of kings in the Bible are faithless tyrants rather than true servants of God. Hence the need for us to thank God for what we have been given and to heed St Paul's command to pray for kings and rulers and to remember that we have our own part to play in creating a Commonwealth that is just and godly. In 1947, the then Princess Elizabeth expressed this partnership thus:

"But I shall not have strength to carry out this resolution alone unless you join in it with me, as I now invite you to do: I know that your support will be unfailingly given. God help me to make good my vow, and God bless all of you who are willing to share in it."

It is our Constitution's foundation upon a Christian conception of monarchy that is its greatest strength and the protection of every freedom and truth that we possess. The Queen did not scheme or plot her way to the throne, she did not arrive by intrigue or personal ambition, instead she accepted a vocation chosen for her – as is expressed in the most sacred moment of the Coronation rite, when the monarch is anointed with chrism as a sign of God's election. Our present coronation ritual derives from that devised by St Dunstan for the crowning of King Edgar at Bath in the year 973. It is a reminder to the Sovereign and to us that Christian monarchy is not so much about power as service and that the Queen too is a subject of the King of kings to whom all sovereignty and power belong.

In her first televised Christmas broadcast in 1957, our Queen spoke of the importance of having faith as the foundation of a civilized society. She spoke about:

"The trouble (that) is caused by unthinking people who carelessly throw away ageless ideals as if they were old and outworn machinery.

They would have religion thrown aside, morality in personal and public life made meaningless, honestly counted as foolishness and self-interest set up in place of self-restraint.

At this critical moment in our history we will certainly lose the trust and respect of the world if we just abandon those fundamental principles which guided the men and women who built the greatness of this country and Commonwealth."

At the heart of our national life is not a flag, or an abstract idea or even a lofty ideal, but a human being. It is after all human beings that make up a society, and any state which becomes impersonal risks existing for its own sake rather than for its people. As we celebrate Trinity Sunday, we can see that God Himself is not a theoretical principle, but a personal being, and that for all eternity it is love continually shared between the Father and the Son in the Holy Spirit that is the ground and being of everything. Love is what gives everything meaning.

Our Queen once said:

"I cannot lead you into battle, I do not give you laws or administer justice but I can do something else, I can give you my heart and my devotion to these old islands and to all the peoples of our brotherhood of nations."

That is what today is all about: personal devotion, loyal service, the giving of one's heart in love. So from this Jubilee we can take something more than the enjoyment of an extra bank holiday. In the scriptures, a jubilee is an occasion to forgive debts, to free slaves, to give rest to the land. A jubilee is not only an occasion to look back but also a new beginning. Remember that each one of us too has been anointed with chrism in Baptism, that we have been given a share in Christ’s role as prophet, priest and king and that we have our own vocations to carry out faithfully. For those who are young and still discerning their future, they can resolve to turn their backs on ambition, on seeking comfort and self-interest and instead to ask the question, "What is the Lord’s will for me? How can I best serve Him and His Church?" This is the secret to real happiness. For those whose calling is already clear, we each have our own part to play in building up the kingdom of God. For married couples: they have the task of sanctifying their spouses and their children; single people: to live chastely as a sign of the reality of God's promises; religious: to model themselves on Christ; priests: to be servants of God's people. We may not feel that our Queen has always had the best advisors or the wisest of ministers, but if that is so, that is our own responsibility. If she has done her part, it is up to us to do ours.

Earthly kingship is only an imperfect, dim shadow of the Lord's eternal dominion over all creation. We can begin to make our own response to the blessings that God has bestowed on us in these sixty years of stability by resolving to be true to the Lord's calling, however costly it may be, and by renewing our prayers today for Elizabeth our Queen, that she may be granted wise counsellors, faithful parliaments, peaceful realms, devoted subjects, health and further years to reign over us, and in the world to come, everlasting life. God save the Queen.