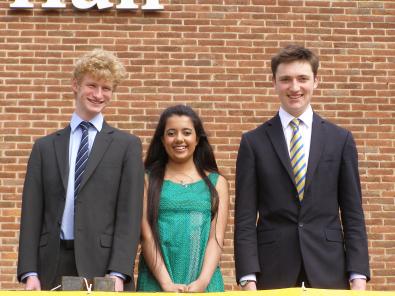 An intrepid group of Oratory parishioners travelled up to Hull on 28th April to support our team of young people representing us in the Rotary Youth Speaks National Final held in the Middleton Hall at the University of Hull.

Speaking once again on the topic "The green-eyed monster" they competed against six other teams from all over the United Kingdom. Distinguished guests in the audience included the Right Worshipful Lord Mayor of Kingston upon Hull, Admiral of the Humber and the Lady Mayoress, whose enjoyment of our team's performance was very visible. Sadly they didn't win - but they acquitted themselves with great confidence and flair. The event was compered by Gervase Phinn, former school inspector, well-known public speaker, raconteur and author of such books as "A School Inspector Calls" and "Road to the Dales - the story of a Yorkshire Lad". He particularly admired the Oratory team's humour and delivery.

So congratulations to Michael Jacobs (main speaker), Natasha Seneviratne (Vote of Thanks) and Brian Clarke (Chairman) for performing so well and reaching the national final in a competition with over two thousand entries up and down the Kingdom.