Here is Abbot Cuthbert Brogan of Farnborough Abbey with the community before Mass: 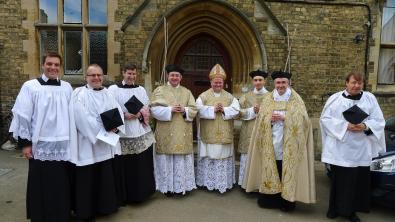 Here the altarino of St Philip on the sanctuary, which was used throughout the novena: 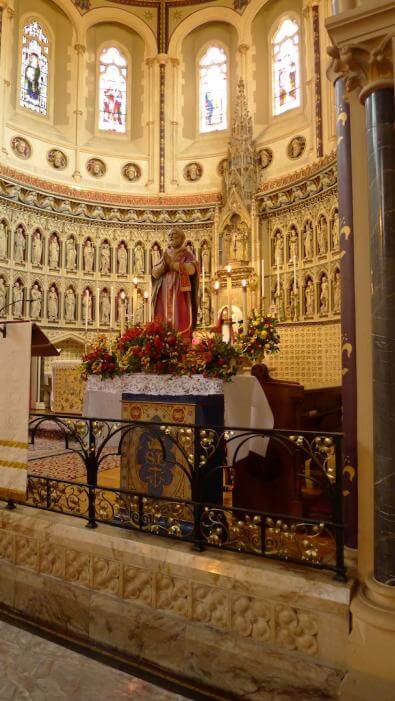 The incensation of the High Altar: 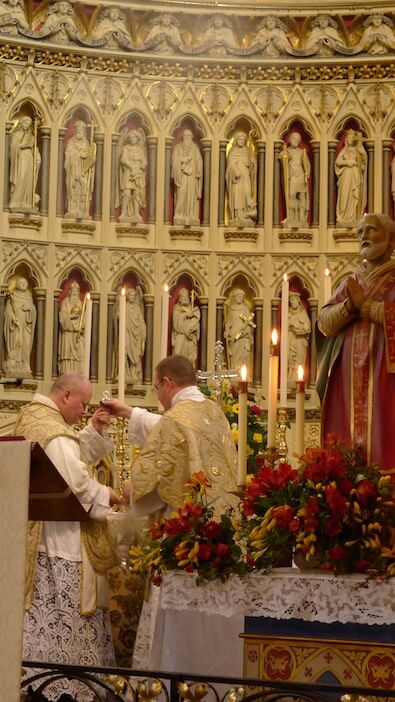 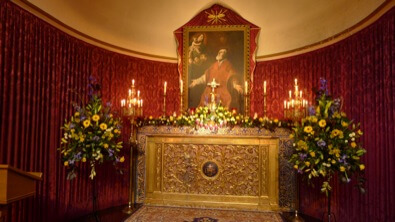 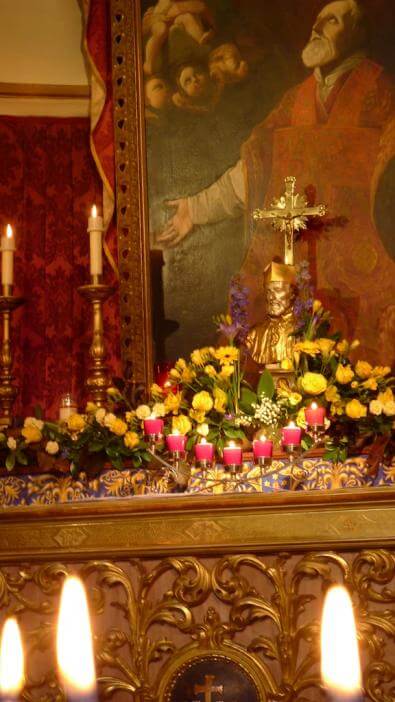 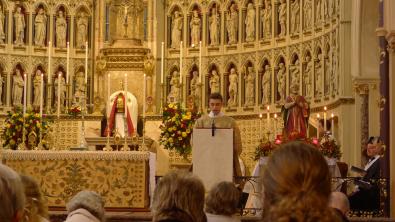 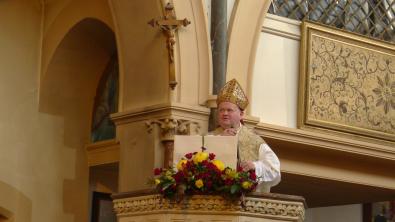 I heard recently the story of one of our American abbots who was rushed to hospital with a heart attack. When the doctor had stabilised his condition, the abbot said to him, ‘Doctor, if I have another heart attack. Please don’t try to resuscitate me.’ ‘That’s quite all right Father,’ replied the doctor –‘ the monks made that quite clear to us when they brought you in.’ To be an abbot is to live dangerously, and I must say I feel a certain sense of ‘dangerous living’ in coming to the Oratory this evening. Not because I suspect the Fathers of the Oratory of being dangerous types who will ill-treat me, but because it is very difficult to come from outside the family- as it were- of St Philip and say anything which adds to what this fine body of men already knows. These men live and breathe the tradition of St Philip – they know every detail of his life. As an outsider, one runs the risk either of trying to educate others up to the level of one’s own ignorance or else carrying out a sort of Ofsted inspection of the arrangements here. But looking at St Philip through Benedictine spectacles might add to the stars in his firmament!

The Patriarch of Western monks, St Benedict, fled Rome, and its corruption and worldliness and sought silence and solitude. His style was to establish boundaries –a high enclosure wall to cut the monk off from the world. He said that everything necessary should be within the monastery – ‘for wandering outside inevitably leads to the ruin of monks’ souls.’ St Philip travelled the same route – but in the opposite direction. He fled the region of Monte Cassino in order to immerse himself in the heart of Rome, he made himself available – day and night. No fuga mundi – fleeing the world – for him, he threw himself into the thick of it, and made himself a refuge from the world in the world’s midst.

I arrived here in Oxford for my studies at roughly the same time as the Fathers of the Oratory arrived. All agreed that the Oratorians would add a certain je ne sais quoi and we eagerly waited to see what the quoi would be. I remember Abbot Alan Rees of Belmont remarking that now the Oratorians were in St Giles with the Dominicans and Benedictines, the whole Church was present –the Church militant, suffering, and triumphant – and all this in the one street! Why have the sons of St Philip proved so successful here in an Oxford which offers such a variety of religious fare?. What do St Philip and his sons offer us which is so attractive?

Newman tells us of Saints Benedict, Dominic, Ignatius Loyola, that they were three venerable Patriarchs, and that the Religious Orders which they founded divide between them, the great moments in the history of the Church. He said that Saint Philip ‘learned from St Benedict what to be, and from St Dominic what to do, and from St Ignatius how he was to do it’.”

‘He learned from St Benedict what to be’ – When we celebrate the feast day of a saint, we celebrate not so much what they did, but what they were. And when a Benedictine reads the life of St Philip and tries to get to grips with what sort of man he was, a number of things jump out from the page at him.

St Benedict tells us in the prologue to his Rule for Monks that ’as we run the way of the Lord’s commands our hearts expand with the inexpressible delight of love’. A dilated heart – un coeur dilaté – as our French brethren put it. Perhaps this is what Newman was thinking of. Philip’s heart famously expanded to the point that it broke bones and its life and rhythm was not confined within his body but made itself heard and felt outside. His eagerness to run the way of God’s commands permitted him to turn into practice the theory St Benedict taught his monks. He became literally ‘big-hearted’, generous self-giving, approachable, with that elasticity, that flexibility, and suppleness of heart which made him so irresistible, so joyful of heart, innovative and creative – with an individuality clearly gifted by the Holy Ghost, and yet so rooted in tradition and orthodox faith.

Another Oratorian love which catches the Benedictine eye is Philip’s attention to Divine Worship. St Benedict tells us that the Oratory of the monastery should be just what its name implies ‘a place of prayer’ and that ‘nothing else should be done or stored there’. An ‘Oratorian’ should be a man of prayer, one completely at home in an Oratory – a place of prayer. And this is why we all feel at home here. Because in our little hearts we all feel a sense of exile. A nervousness, a restlessness, because our hearts want more than this limited world offers. We yearn for the satisfaction of our true and heavenly homeland. But here in beauty, in order, in prayer, in music, in the cogs and machinery of the great clock of the liturgical year, in feasts and fasts, we glimpse that heavenly homeland and so each of us feels at home. The splendour of the liturgy, the love of the saints – in these things we see the immeasurable beauty of the face of Christ and we know ourselves to be in God’s house, happy in the good company of the saints, the company of solid friends, and so we leave here always refreshed and strengthened.

Philip in a sense made an oratory of his heart. Like the Oratory of the Benedictine Rule, it was completely given over to prayer and nothing else was done or stored there. Rome’s rank and youth flocked to it to learn this prayer, along with right-living and Godliness. It was a retreat, a place refreshment, a place where they could not only be themselves but travel farther along the route of what God intended them to be.

The work of Christian life is to obtain and maintain a pure heart. St Ephrem in the fourth century expressed it well. He said that our hearts were like mirrors of polished metal. To obtain a clear image they must be sanded and scoured by repentance and penance, polished and buffed by prayer and good works until gradually so clear and brilliant an image emerges, that when our Lord comes as judge at the evening of our lives he sees in our hearts only His own face, His own image and likeness.

The epistle today speaks of various realms of excellence. Philip is readily loved by us all because so many of the charisms of the various orders can be seen in him. We monks see in Philip a monastic heart, the Dominican sees an eloquent preacher…etc.. St Philip has joined Ss. Benedict, Dominic and Ignatius in that list of patriarchs – of venerable fathers of many sons. Philip offers us a rather heady cocktail of the best ingredients of their charisms. And when the Church puts before us the lives of the saints She does so to encourage us, but also to remind us that these wonderful things are within the grasp of each of us when we cooperate with God’s grace and run the way of His commands. When our hearts thus expand, they cease to be private chapels but increase their seating capacity as it were – they become places in which others find refuge, we become moments of stability, of confidence, of hope for others.

The famous prayer of Baronius tells of ‘calamitous seas’. Such a phrase seems over-dramatic for tranquil north Oxford, but we can at least acknowledge that life’s waters can get choppy from time to time. St Philip, look down on us as we steer the little boats of our lives through the choppy waters of temptation and the cares of this world, and may we at the evening of our lives enjoy your company in our heavenly and true homeland, and see for ourselves the greatness of your heart and the smile of your eyes. 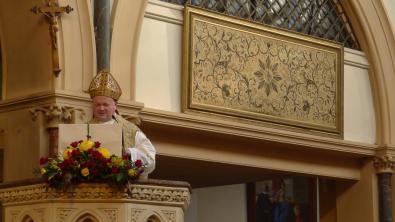 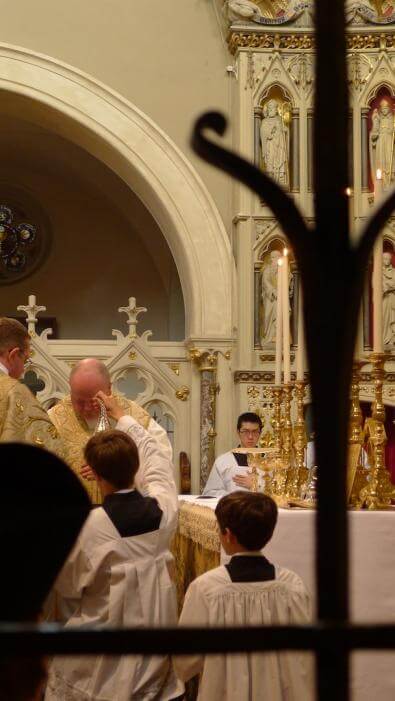 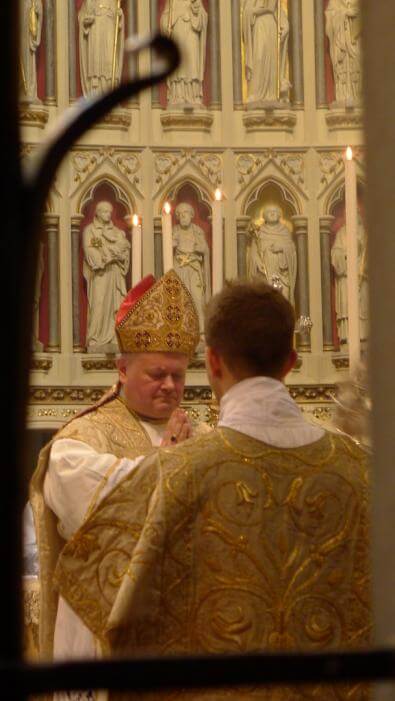 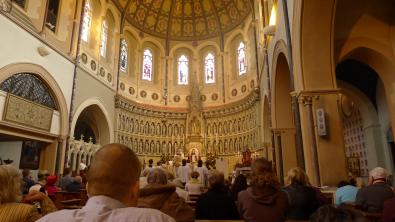 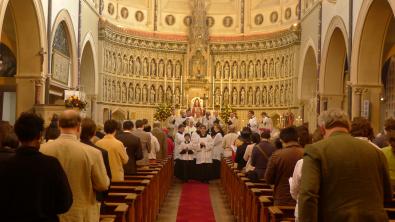