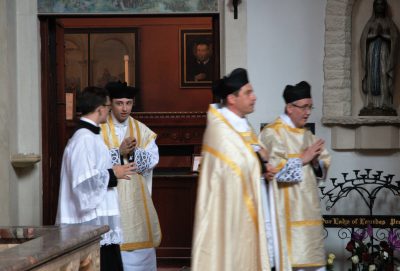 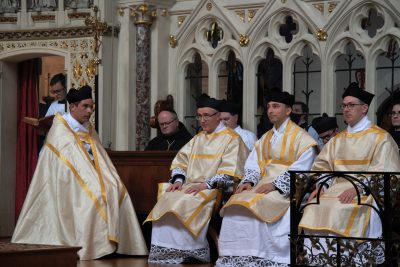 Fr Dominic preached the sermon which is reproduced below: 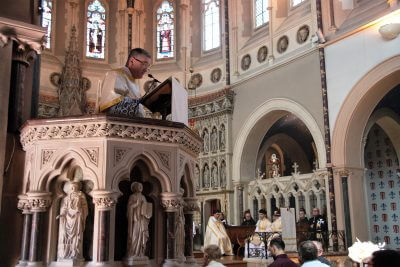 Many years ago now, I recall Monsignor Stark (formerly Master of the Guild of Ransom) telling how his grandfather, a member of the SVP of a parish adjacent to the Birmingham Oratory, in the 1880s, had cause to go to the Oratory to fetch a priest to minister to a sick woman. The porter went off in search of one of the Fathers, leaving Mgr Stark’s grandfather alone in the darkened front hall. Presently he noticed a little bundle seated in a corner – the “little bundle” spoke to him: “If none of the Fathers can be found, and if you get me a cab, I will come with you. After all, I am a priest.”

I don’t recall whether or not in the event our Cardinal did have to go, but I am certain that neither his great and venerable age, nor his eminence, would have prevented Blessed John Henry from going to anoint and comfort a dying woman, for he who reminded us that “God has created us for some definite service”, never forgot that service for which he had been made: to serve God and his people as a priest.

Last night, you had conferred on you the grace of ordination to the sacred priesthood: you were called out from among the people whom you shall serve, hands were laid on you, your own hands were anointed by the bishop and you rose from your knees a priest, Christ’s servant and friend.

We say many beautiful things about the priest, don’t we? We call him “alter Christus”, “sacerdos in aeternum”, “sacerdos et hostia”, all so beautiful and true. Yet keep in mind, above all, dear Father, that you are Christ’s servant and friend. Live these two realities and you will indeed become another Christ, and if you continue faithfully along the path on which you are now set, you will be a victim, offering yourself each day alongside your Lord, for his flock, which you tend in His name.

You will do this, I know, in St Philip’s way with “gentleness and kindness” and with a profound sense of joy. Imitate our saintly father, not in his quirkier eccentricities, but in his forbearance with others. Imitate him in his love and desire for prayer. Be with your people, encourage them by your example as you struggle alongside them. They need to know that you are with them, that you “are there for them”.

You’ve probably already discerned that what a priest is, speaks louder than what he says, and that to some extent, the priest’s life is the sermon people will rate. It has been said that he often speaks best when his mouth is shut. The messenger is never more important than the message he bears, but having been charged with the responsibility of delivering that message, makes him a part of it. So, he must love it with all his heart and love the people to whom he is sent, otherwise he will not care whether or not they accept that he brings the Good News of Jesus Christ, or whether or not they become saints. And that is our business here, “to help people become saints in their own homes”. In an Oratorian parish, we set out to do this together.  Of course we make mistakes, and as I told you years ago when you began your novitiate, we have to learn to live with them. There will be misunderstandings and fallings out. In an ideal world, Church or community, these things wouldn’t happen, but they do, and when they do, do your best to put things right as quickly and gently as you can, for part of our priestly ministry is concerned with healing.

I like the image of the priest as “pastor”, as shepherd: he is called to be a priest after the heart of Jesus, the Good Shepherd; and this surely means learning to love like Him.

The last time St Peter met Our Lord was when they took breakfast together by the shore. As soon as the meal was finished, Jesus turned to Peter and asked him, not once, but three times, “Do you love me?”. Three times the Apostle replied, “Yes, Lord, I love you”. Now, Our Lord was not being “needy” when he pushed Peter on this point: rather he wanted to know that Peter was back on track, on side, after his triple denial, and he wanted Peter to know that he was quite, quite forgiven, when he charged him with that awesome responsibility, “Feed my sheep”. I wonder if the final answer Our Lord wants from those who claim to love him is an answer that isn’t so much spoken as lived. Actions, not words.

Dear Father Oliver, by God’s grace and mercy, you have reached the starting line; and you are off! Run the race that is set before you, run with Christ and towards Him. Take with you those whom the Lord entrusts to your special care. Love them, protect them and guide them with a father’s love, feeding them by God’s Word and the sacraments, most especially in the Holy Eucharist, “that touch of love from Christ which heals, transforms and gives life”. (Cardinal Hume)

Go in search of the lost sheep – the ninety-nine will be in good hands. There are, I think, many lost sheep out there, waiting and wanting to be found.

Go to those for whom religion makes no sense at all; help them to come to see that the message you are bringing is good news, worth listening to, of great importance and supreme beauty. This you can do through your preaching, your prayers, your generous availability to those who come to you in need, and your cheerful example.

I remember the preacher at my first Mass – you were but a month old! – saying to the people, “You get the priests you deserve”. I couldn’t tell if he was commiserating with them or perhaps admonishing them; I’m not certain he was congratulating them! But if this is true, then be the priest, the pastor, to them who will make them feel loved and in safe hands, knowing that what you teach them is the truth and that whatever you do, be it at the altar, the pulpit, in the Oratory, wherever, that it all matters, because God matters, and that, consequently they matter.

May the Lord bless you, Father. May St Philip help you by his prayers to remain faithful to your calling to serve, so that many years hence, when you are old and feeling your years, when you feel you have given your all and done everything you can, like Blessed John Henry, you may remember with profound gratitude your God-given purpose and say, “I am a priest”, for which God be thanked! 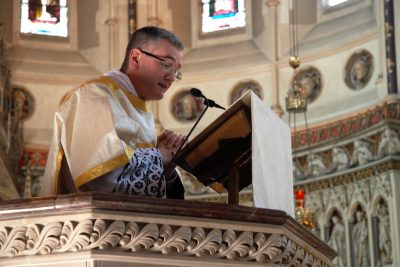 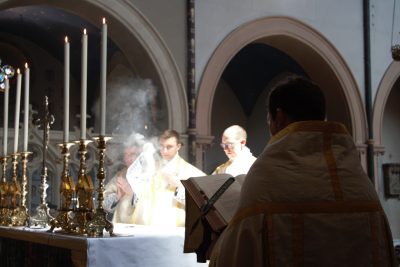 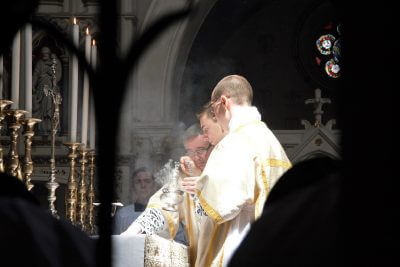 Standing at the Altar of God: 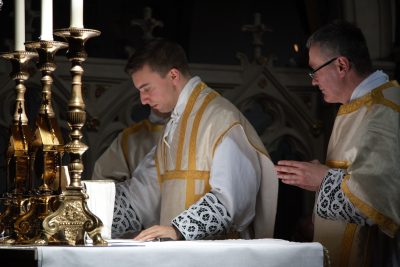 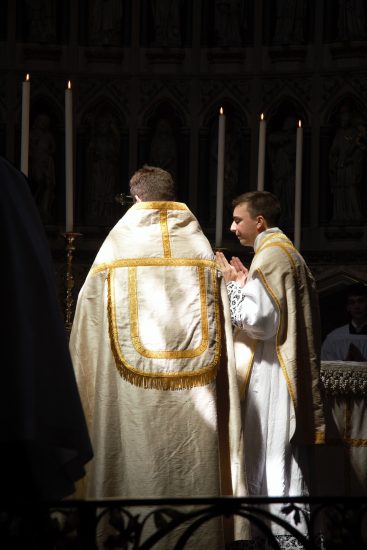 The elevation of the chalice: 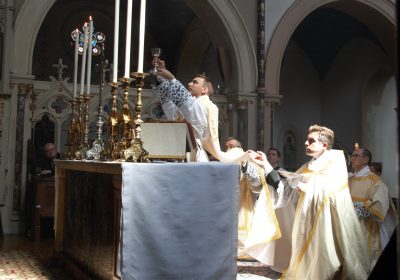 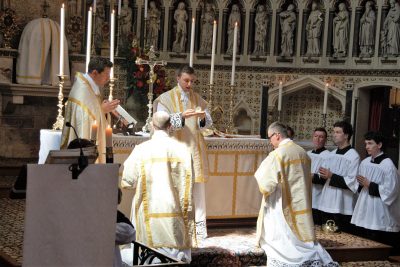 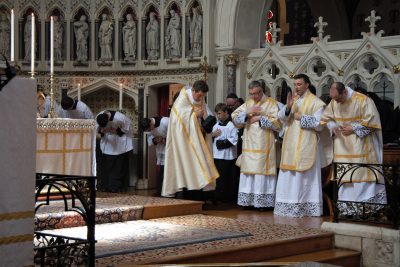 Leaving the sanctuary at the end of Mass: 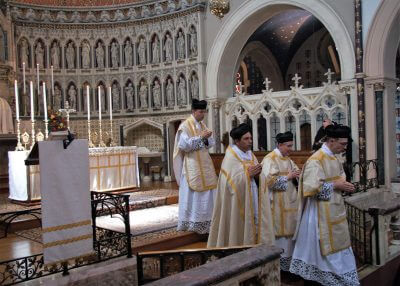 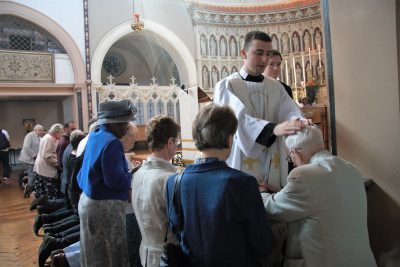 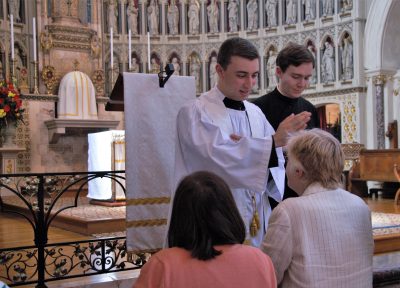 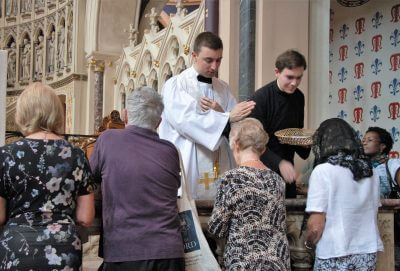