News > Archive > Let your forbearance be known unto all

Let your forbearance be known unto all

The throne is prepared for the Apostolic Nuncio: 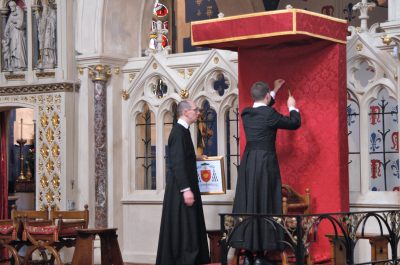 His Excellency venerates the Crucifix upon entering our church: 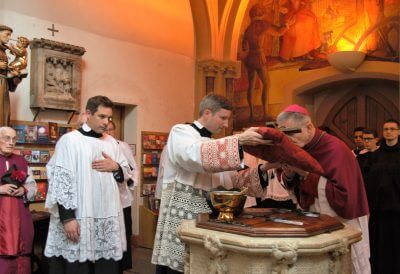 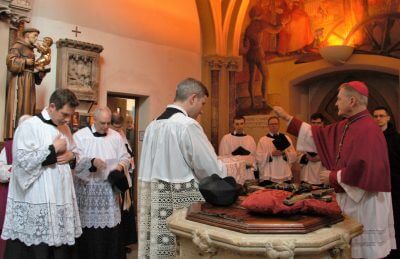 His Excellency processes into church: 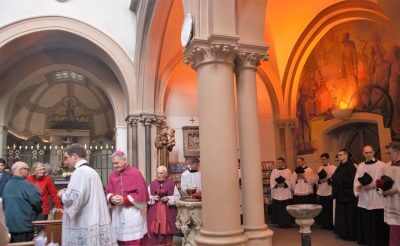 He visits the Blessed Sacrament: 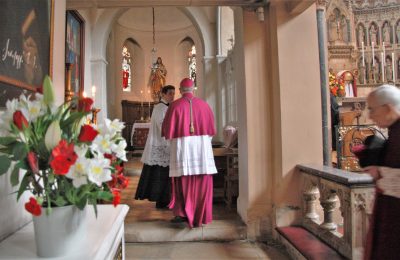 A Pontifical Mass was celebrated for St Philip's Day by His Excellency Archbishop Edward Adams, Apostolic Nuncio to Great Britain. 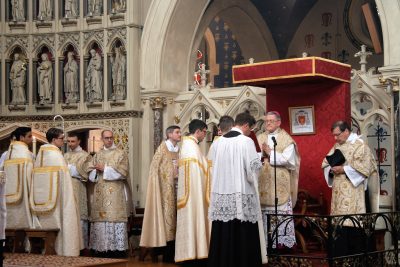 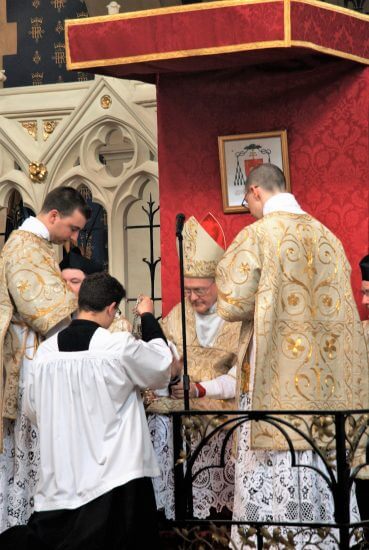 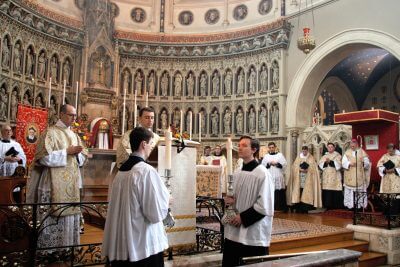 Here is his excellent sermon:

“Let your forbearance be known unto all.” (Philippians 4:5)

The 16th century heresiarch, Jean Calvin, was scandalized by what Catholics believe about our Lord’s Real Presence in His Eucharist. Calvin thought it was gross superstition to assert that the Saviour could be “summoned by a formula and dismissed by digestion”. But that is what happens in part, although it is not trivial but sublime. It might seem trivial if it were not for the fuller theological context of our Eucharistic faith. The Real Presence is part of the Blessed Trinity’s grand ordinance of redemption, sanctification and salvation. In God’s merciful plan, His transcendence and His grandeur have been scaled down for us, to a level small enough for us to cope with. If the Lord’s substance in the Blessed Sacrament were not veiled by the accidents under which we receive Him, we would all surely fall apart. Divinity and its attributes are too potent, too huge for us to handle, unless they be mitigated, scaled down, and filtered. “Summoned by a formula and dismissed by digestion.” 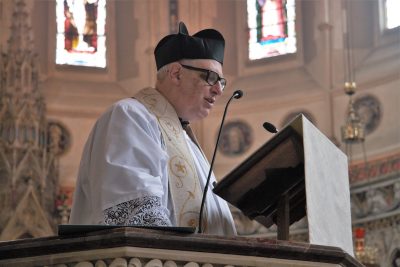 Scaling Himself down to our level is the way the Almighty has always dealt with us humans. We see this supremely in the hypostatic union in Christ. When God came among us, He emptied Himself, we might even dare to say, He filtered Himself, so that we could cope. As the new and greater Moses, Christ’s divine glory is veiled, so that we will not be blinded by His splendour. On the Last Day that veil will be set aside, and in the dazzling glory then revealed every knee shall bow.

Until that Last Day, the Lord veils His glory for our benefit. God translates Himself into our vernacular, and in that translating something of the divinity is inevitably occluded, not from God of course, but from us. Perhaps that is why occasionally something unearthly is allowed to pass through the filter. Think of the strange phenomena that accompanied the giving of the Law to Moses on Sinai. Weirder still, the visions of Ezekiel. Or, the dazzling light of our Lord’s transfiguration on the mountain. Or, the strange signs that accompanied the descent of the Paraclete at Pentecost; a mighty rushing wind, darting tongues of fire.

Down the ages, many saints and visionaries have reported seeing unearthly realities, often accompanied by inexplicable phenomena. St Paul on the road to Damascus was temporarily blinded by the dazzling light of the vision that converted him. The three Little Shepherds of Fatima saw a Lady shining more brightly than the sun. Then there is what must surely be the weirdest of all public miracles since Pentecost, the so-called miracle of the sun at Fatima on 13th October 1917. Something like a shining disk was seen spinning and lurching across the firmament, seen by upwards of 70,000 people, believers and non-believers alike. How odd of God.

Such strange events convey something of the incomprehensible otherness of our Creator. Just occasionally heaven does something to remind us that there is more to our Maker than we can imagine. That partial lifting of the veil is, I believe, the key to understanding the strangeness which characterized the life of our Glorious Patriarch, whose solemnity we celebrate today. Whatever it was that happened to our holy Father in the Roman catacombs in 1544, one of its major effects was simply – strangeness. A high degree of strangeness that became the medium in which the rest of his life unfolded.

Just before Pentecost in 1544, while still a layman, Philip was praying in the catacombs of St Sebastian for the gifts of the Holy Spirit. He saw and felt something like a globe of fire coming towards him. It entered his mouth, sank down inside him and enlarged his heart. After his death his rib-cage was found to be forced outwards, and his heart was very much larger than is normal. After this personal Pentecost, Philip's life was a continual series of unusual spiritual phenomena and miracles.

After he had reluctantly become a priest in 1551, his penitents found that he often had the unnerving gift of knowing their sins before they found the courage to confess them. Philip Neri was charismatic in the true sense of that over-used label. He received charismata from on high and used them for the spiritual benefit of others. He drew so many souls to God, and was a major influence in the much-needed reform of the Church in 16th century Rome. For us who are of his family, it is an abiding benefit of his personal Pentecost that he has set up his houses in all lands, even here, on Northern coasts.

The human mind is small, and likes to find neat compartments in which to fit the things that puzzle us. Have we not done this with Philip’s biography? The earliest witnesses were very clear about the strangeness of his palpitating prayer habits, his solitary and extended celebrations of Mass in private, his shaking, his continuous weeping, his jumping and dancing around, the weird lights that sometimes surrounded him, his levitating, his bi-locating, his precognition, his clairvoyance. In all of that the normal and the rational had little place.

Confronted with the seemingly inexplicable, some of Philip’s subsequent admirers moved towards a rationalizing and a sanitizing of the strangeness. It was an easy solution to assume that some or most of his oddities were simply his sense of humour, a light-hearted playfulness, an expression of Christian joy. That reductive hermeneutic somehow came to be accepted as fact. The truth is actually more rarified I think. Yes, he had jokes read to him in the sacristy before Mass, but not because he was a funny man. It was because he needed something to keep the ever encroaching strangeness at bay. He needed to keep his feet on the ground, at least until after the consecration. He needed to remain in the everyday world, until he could immerse himself in the supernatural, during the two solitary hours that habitually passed between his reciting the Agnus Dei and receiving holy communion.

Is it not dodging the issue somewhat to say that Philip was simply humorous? The plain truth is that he was simply - weird. Nevertheless, for several hours every day, in the confessional, at the afternoon oratory, in his street apostolate, his strangeness somehow managed to interact with the everyday world, though never in a way that could be called completely normal. The supernatural and the praeternatural were always manifesting. His interactions with everyday reality were a real effort for him, a departure from the unearthly invisible realm into which the globe of fire had skewed him in the catacombs, and from which he never fully emerged. Towards the end of his life he admitted that he could stop the palpitating and the shaking if he chose to, but if he did so he was unable to pray.

As regards his pastoral ministry, the strangeness was certainly fruitful. It issued in a person to person evangelization, and highly customized spiritual direction. He didn’t expatiate on the merits of family life. Instead, he concentrated on converting individuals, people from any sort of family or none. He didn’t engage in theological polemics. Instead, he brought individuals to their knees, clergy and laity alike, first in the confessional, then in front of the Blessed Sacrament, and then in front of an image of the Madonna.

In making Philip Neri a temple of the Spirit, God lifted the veil a little. The Lord allowed something of His otherness to be glimpsed. There are two mistakes to avoid here: the first would be to try and simulate the strangeness, as if it were a regular path to holiness. The second would be to forget that such glimpses of what Newman called ‘The Invisible World’, though intriguing, are no more than a reminder and are not intended to be normative. The lifting of the veil is atypical, and will remain so until this world passes.

In St Peter’s basilica in Rome, St Philip’s statue is situated near the chapel of the Blessed Sacrament, appropriately enough. Characteristically, he is clutching his enflamed and palpitating heart, and gazing upwards towards heaven. What a wonderful Saint, and we of the Oratory are blest to be his continuing and extended family. But let us forbear from wanting to be something that we are not. The Oratory of Saint Philip Neri is a small marginal note in the overall history of God’s Church. We are a small Congregation in a very large vineyard.

Although we are not called to follow our Saint in his strangeness, nevertheless may we always follow him closely in his zeal for saving souls, and doing good. A blessing I wish for us all. 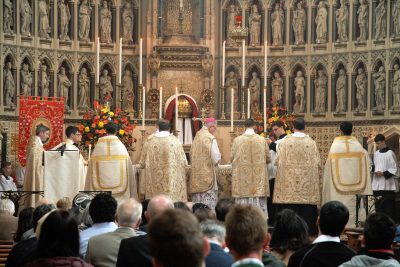 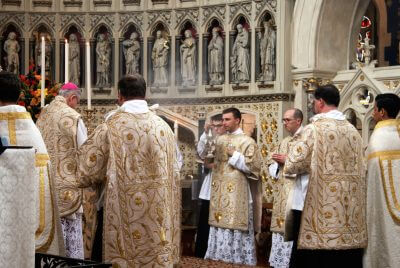 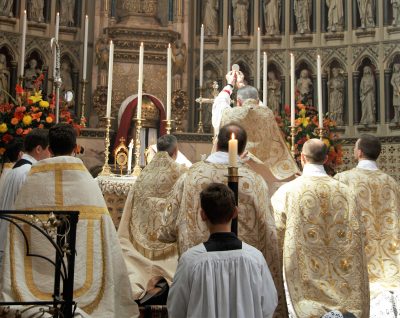 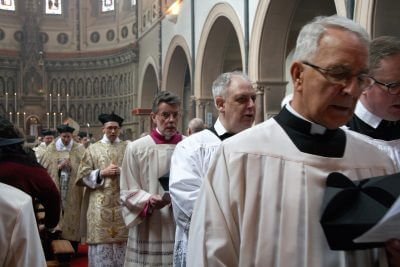