News > Archive > Saint Teresa of Calcutta, pray for us!

Saint Teresa of Calcutta, pray for us! 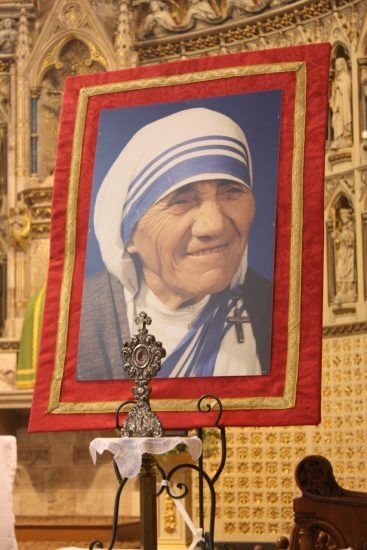 Parishioners were given an opportunity to celebrate the canonization of Mother Teresa on Sunday with a Solemn Mass of thanksgiving, followed by the Te Deum and veneration of her relic. Father Daniel preached the following sermon:

This morning in Rome, the Holy Father has pronounced the canonization of Mother Teresa of Calcutta. What does it mean for us? Firstly it is a sign of hope for us because we can know for certain that Mother Teresa’s soul is in heaven. In raising saints up for our veneration, the Church exercises her office of teaching infallibly, says St Thomas Aquinas. (The veneration of the saints) is “a confession of the faith, in which we believe in the glory of the saints”, he wrote. Not all those in heaven are canonized, but those who are give us hope that this is the purpose of our lives too. This is what the Church is for; we are meant to follow them in holiness and so to arrive at the same destination. In proposing the lives of the saints to us as models, the Church also gives us intercessors: we are part of the same body as them; their prayers can certainly help us.

For many of us, St Teresa is a saint with whom we feel an instant connection because she was so well known during her life on earth. Perhaps some of you were present as I was in 1993 when Mother addressed the Oxford Union and courageously proclaimed the Gospel of Life with humility and clarity. So in fact, she is a saint who has visited our parish. On the same visit, St Teresa went to the then Notre Dame Convent, next door to St Aloysius’ School. Mrs Webb, who was teaching her class, saw Mother Teresa out of the window and took her pupils over to the fence to meet her. St Teresa told her what an important vocation it is to be a teacher, and to the children she gave each a small miraculous medal, as she did with everyone she met, saying, “Mary, Mother of Jesus, be a Mother to me”.

So it is right that we, together with so many millions of others, can lay a special claim to St Teresa’s intercession in heaven, feeling sure that she will answer our cries just as she answered the cries of the poor, the dying, the naked, the thirsty, the imprisoned and the hungry when on earth. But: and here I can only speak for myself, the holiness of the saints is a bit terrifying. Here is a women who said “yes” to the Lord without reservation, who saw Him in “the distressing disguise of the poorest of the poor” and picked those poor up off the streets of Calcutta, who allowed herself nothing of earthly comfort but rather in the darkness of her inner soul allowed herself to be totally conformed to the Passion of Christ. And what have I done? I suspect that many of us should tremble at those words of Our Lord:

St John the apostle is equally explicit about the fate of those who close their hearts:

“If you refuse to love, you must remain dead; to hate your brother is to be a murderer, and murderers, as you know, do not have eternal life in them.” (1 John 3:14–15)

Strong stuff; and a reminder that an event like today’s canonization is not just an excuse for us to pat ourselves on the back, feel good about humanity, and be complacent; no: the life and witness of Saint Teresa of Calcutta is for every single one of us an urgent call to conversion. Our Lord does not politely request that we give a brief thought to Him every now and again; He demands that we follow Him, He commands that we act as His witnesses, He says to us insistently, “Be perfect, even as your heavenly Father is perfect”.

And this call is not just for an elite few, it is for all of us. There is a universal call to holiness. Universal in the sense that there is no opt-out for me or you. Our Lord is not interested in crowds, He has made each one of us individually in His image and likeness. In the criticisms of Mother Teresa, which you can find in all the predictable places in the media, there is a common theme: rather than trying to achieve the greatest good for the greatest number, Mother concentrated on the individual, rather than killing the children of the poor in the womb or stopping them reproducing in the first place, Mother loved the babies and mothers for whom she cared. We have seen in the past century what happens when we care about this nebulous concept “humanity” rather than individual human beings: it has led to concentration camps, gulags, experimentation on human embryos and a society that has never known such high levels of unhappiness. This is why Mother Teresa said when she was presented with the Nobel Peace Prize that the greatest destroyer of peace today is abortion. It is because the moment that we forget that every man, woman and child is precious in God’s eyes then we become incapable of love. Love is not drawing up a five-year plan or constructing an ideology, it is about seeing Christ in this particular, broken, sinful, flawed person whom we are called to love in this moment.

At the beatification of Mother Teresa, thirteen years ago, St John Paul II put it like this:

It was to Jesus Himself, hidden under the distressing disguise of the poorest of the poor, that her service was directed ... She wanted to be a sign of “God’s love, God’s presence and God’s compassion”, and remind all of the value and dignity of each of God’s children, “created to love and be loved”. Thus was Mother Teresa ‘bringing souls to God and God to souls and satiating Christ’s thirst.

There are two phrases of Our Lord which sum up St Teresa’s mission: the “I thirst”, He spoke from the Cross, and those words she heard on the train to Darjeeling in 1946: “Come, be My light”. Teresa sought to quench the thirst of Christ, and to be a light to others even though for many years, within herself, she felt only an inner darkness.

This harsh spiritual trial led her to identify herself more and more closely with those whom she served each day, feeling their pain and, at times, even their rejection. She was fond of repeating that the greatest poverty is to be unwanted, to have no one to take care of you.

And this is why holiness is not to be left to the few but it is a call for all of us. Mother Teresa loved the saying of her patron, St Thérèse of Lisieux: “To be a great saint means to do small things with great love.” She also said, “Peace begins with a smile”. We too are called to quench the thirst of Christ by loving Him in those we meet every day, to be His light in all the darkness of the world around us. The order Mother Teresa founded is called the Missionaries of Charity because their purpose in tending the poor, the sick and the unwanted is not just to solve a social problem, but to be a light to others, to bring the light of Christ to the darkness, to be missionaries. To be a missionary is the vocation of every Christian, it is your vocation. To see Jesus in others is the one difference we can make.

At the end of this Mass we shall have the opportunity to venerate a relic of St Teresa of Calcutta, a piece of her hair. It is a reminder to us that the saints are not distant from us: we have seen them, and we can touch them. And whatever you do to the least of my brethren, you do it to Me.