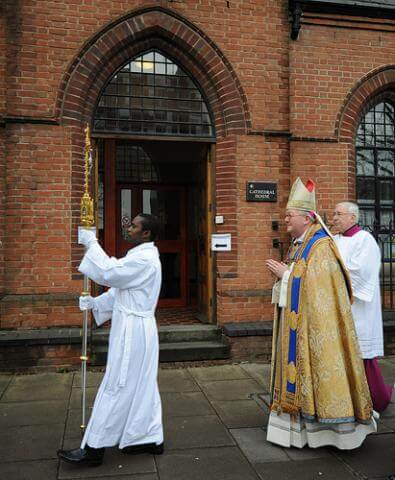 Fr Richard and Fr Daniel were among the 325 priests who concelebrated at St Chad's Cathedral on the Solemnity of the Immaculate Conception at the enthronement of the Most Reverend Bernard Longley as the Ninth Archbishop of Birmingham. His Grace is very familiar with our city, having been a choral scholar at New College. We look forward to when he will visit Oxfordshire next year. 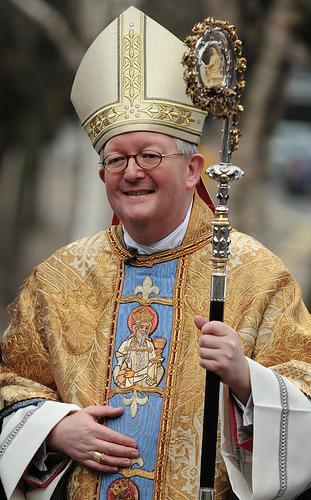 Archbishop Bernard Longley was Installed as the Ninth Archbishop of Birmingham, in the Metropolitan Cathedral and Basilica of St Chad, Birmingham, during a special Mass on the Feast of the Immaculate Conception of the Blessed Virgin Mary, Tuesday, 8 December, one of the two Patronal Feasts of the Archdiocese of Birmingham. 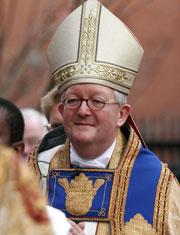 The climax of the memorable and deeply prayerful 2 1/4 hour ceremony was the moment when Archbishop Vincent Nichols, now Archbishop of Westminster and President of the Bishops' Conference of England and Wales, presented his successor Archbishop Bernard Longley, with the crozier of Bishop William Bernard Ullathorne, OSB, first Bishop of Birmingham, 1850-1888. 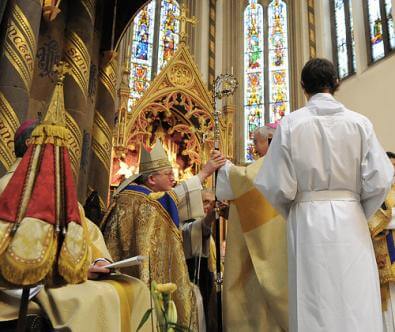 The Holy See announced on Thursday, 1 October, the Feast of St Thérèse of Lisieux, that Pope Benedict XVI had appointed Bishop Bernard Longley, Auxiliary Bishop of Westminster, as the new Archbishop of Birmingham.

As he handed him the crozier, Archbishop Vincent Nichols said: "Archbishop Bernard, at the wish of the Holy Father, Pope Benedict XVI, you have assumed the pastoral charge of the Church of Birmingham. I hand on to you this Crozier, the sign of the shepherd's office and ministry. May the Lord sustain you in your care for the people of the Archdiocese."

Everyone in the packed St Chad's Cathedral of more than 600 people stood and applauded the newly enthroned Archbishop Bernard Longley, aged 54, who looked resplendent in the vestments of his predecessor, Archbishop Edward IIsley, the second Bishop and the first Archbishop of Birmingham, 1888-1921.

More than 325 priests from the Archdiocese of Birmingham, Westminster, Southwark, and the Diocese of Arundel and Brighton, concelebrated the Mass, together with most of the hierarchy of England and Wales. Archbishop Mario Conti, Archbishop of Glasgow, who has family connections with Birmingham, represented Cardinal Keith O'Brien, Archbishop of St Andrews and Edinburgh.

Among Archbishop Bernard Longley's personal guests were his father, Fred Longley, aged 81, and his sister Kathleen Lloyd. Before he came into the Cathedral, the Archbishop-Elect, accompanied by his Secretary and Master of Ceremonies, Fr Martin Pratt, visited the nearby Grimshaw Room and spoke to more than 100 people who watched the ceremony via close-circuit television.

At the start of the Mass of Installation, Bishop David McGough, Auxiliary Bishop of Birmingham, and Provost of the Metropolitan Chapter welcomed the congregation. He said: "As a sign of his authority, the new Archbishop is to be installed in the Bishop's throne or Cathedra and presented with the Crozier."

The Metropolitan Chapter in their red robes received the Archbishop-Elect at the West Door of the Cathedral. Then a crescendo of sound filled this great Pugin architectural jewel, situated near Birmingham city centre, as everyone joined in singing Cardinal Newman's great hymn "Praise to the Holiest in the height", from his poem "The Dream of Gerontius", set to music by Elgar.

It was a most appropriate choice as Archbishop Bernard Longley, who studied and has a great love of music, will be closely involved in the preparations for the beatification ceremony of Cardinal Newman, likely to take place in the Archdiocese of Birmingham on a Sunday during mid-September 2010.

Then on the instructions from the Papal Nuncio to Great Britain, Archbishop Faustino Sainz Munoz, the Diocesan Chancellor read the Apostolic Letter.

At this point in the ceremony, the most significant moment, Archbishop Vincent Nichols presented the Bishop Ullathorne Crozier to Archbishop Bernard Longley. He was now the pastor of his flock in the Archdiocese of Birmingham.

The new Archbishop was greeted by a group of representatives of the Clergy, Religious and People of the Archdiocese, before the Canons of the Metropolitan Chapter greeted him individually. 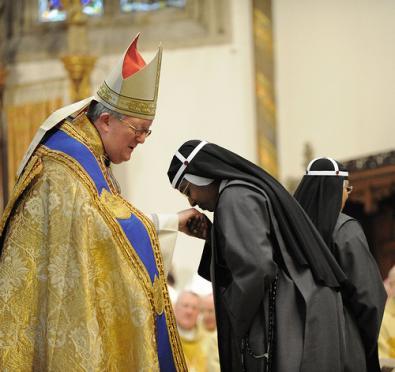 Archbishop Longley then greeted the civic leaders and ecumenical guests. These included the Anglican Bishop of Birmingham, Bishop David Urquhart, and the Lord Mayor of Birmingham, Councillor Michael Wilkes and the Lady Mayoress.

Lord Camoys of Stonor, in the Archdiocese of Birmingham, Lord in Waiting to HM The Queen from 1992-97 and a Permanent Lord in Waiting since 2000, represented Catholic members of the House of Lords.

The magnificent St Chad's Cathedral Choir, under its well-known conductor, Mr David Saint, sang the Gloria from the Mass of St Nicolas, by Franz-Josef Haydn. During the Offertory Procession the choir sang "The Spirit of the Lord is upon me", Isaiah 61, from "The Apostles" by Sir Edward Elgar.

The music during the Mass would undoubtedly have been much appreciated by Archbishop Bernard who lists his principal hobbies as music, and in particular singing, especially English songs and German lieder.

The first reading from the Book of Genesis was read by Craig Davies, the most recently Installed Lector at St Mary's College, Oscott, the Diocesan Seminary, situated in the outskirts of Birmingham. It was here in July 1852 that Cardinal Newman preached his famous "The Second Spring" sermon, at the First Synod of the New Province of Westminster.

The second reading from the letter of St Paul to the Ephesians was read by Sister Patricia Kelly, ODN, from Notre Dame Convent in Cobham, Surrey, where Archbishop Bernard Longley lived while he was working for the Bishops' Conference of England and Wales. The Gospel according to St Luke was read by Permanent Deacon Brian Cox from St John the Baptist parish in Tamworth.

Archbishop Bernard Longley began his first ever homily in St Chad's Cathedral: "In preparing for this day I have been very conscious that I am entering into the life of a Christian family that has a long and rich history as well as its distinctive vocation to make Jesus Christ present, known and loved in this, the heart of England."

The new Archbishop of Birmingham then spoke about the example of Blessed Dominic Barberi and Cardinal Newman. He said: "Blessed Dominic Barberi was so driven by God's call that he saw from an early age that he must leave his native Viterbo and come to England to preach the Gospel where Catholic faith was beginning to flourish again. We know how hard he worked in Stone in Staffordshire and how his dedicated life as a priest so touched and influenced Cardinal John Henry Newman and helped Newman to find the future direction of his own life and work."

Archbishop Longley stressed: "In the remarkable year ahead when we prepare for his Beatification, we will be influenced by the way that Cardinal Newman responded both within the Church of England and in the Catholic Church to the call from God: "Where are you?" His Apologia Pro Vita Sua makes plain his diligent and unselfish search for truth in his own life and for the world, and his hymn Lead Kindly Light sums up his complete confidence in the guiding hand of God. During this Year for Priests Cardinal Newman and Blessed Dominic offer us two wonderful, complementary examples of how to be faithful to the path of life mapped out for us in God's providence when we were ordained."

Archbishop Bernard added: "I only arrived in my new home last Wednesday (2 December) and on the next day I saw posters and banners advertising the Nativity Trail at the City's Museum and Art Gallery. I felt so encouraged to see this prominent institution, with the support of the City Council, enabling the story at the heart of Christian faith to be experienced and appreciated through the beauty and the message of great works of art in public ownership. I am grateful that our Civic Leaders have been able to join us today."

Archbishop Bernard Longley concluded: "I also recall the early experience of Bishop William Ullathorne. As a teenager he experienced something that changed the whole course of his life when far from home in the Baltic port of Memel, modern-day Klaipeda. Through the faith and devotion of the local people at Mass he felt God's power claiming his own life. As I visit the parishes and school of our Archdiocese in the years ahead I pray that I too may continue to be moved by the faith and witness of our priests and people and always open, after the example of our Lady, to the claim of God upon my life. Please continue to pray for me."

During the Sign of Peace the new Archbishop of Birmingham warmly greeted the Ecumenical and Inter-Faith guests.

Before the Final Blessing the Apostolic Nuncio, Archbishop Vincent Nichols and Cardinal Cormac-Murphy-O'Connor, Archbishop Emeritus of Westminster, addressed the congregation. The Cardinal, who ordained Archbishop Bernard Longley to the Priesthood for the Diocese of Arundel and Brighton on 12 December 1981 at St John's Seminary, Wonersh, and as Auxiliary Bishop of Westminster on 24 January 2003, said: "Every work that he (Archbishop Bernard) has done in the service of the Church he has done with wisdom and with zeal, and always with kindness." Cardinal Cormac added: "I think you are very fortunate as an Archdiocese to have this good man as your new Archbishop."

Archbishop Vincent Nichols, whose appointment as Archbishop of Westminster was announced by the Holy See on 3 April 2009, said: "He (Archbishop Bernard) will grow to be a really great Archbishop of this Diocese. So welcome him as you welcomed me so that together this Diocese may grow in the blessings and love of the Lord."

During the recessional hymn, "Tell out my soul, the greatness of the Lord!", the colourful processions made their way slowly out of St Chad's Cathedral and into the bright, cold early afternoon.

Archbishop Bernard Longley was accompanied by Bishop David McGough, Bishop William Kenney, CP, his two Auxiliary Bishops, Bishop Philip Pargeter, retired Auxiliary Bishop, and Archbishop Vincent Nichols, Archbishop of Birmingham from 2000 until 2009. They paused briefly by the main door for pictures, before Archbishop Bernard Longley was greeted by the deacons, priests, and his brother bishops, who had formed four lines along the forecourt.

The new Archbishop of Birmingham then made his way past the Diocesan Curial Offices to the nearby Salvation Army Citadel, where he was warmly welcomed by Major Samuel Edgar, Divisional Commander of the Salvation Army, West Midlands Division.

Inside, Archbishop Longley greeted an overflow congregation of more than 200 representatives of parishes throughout the Archdiocese of Birmingham who had watched the ceremony via close-circuit television. He thanked Major Edgar and the Salvation Army and invited Major Maurice Hunt, Commander of the Citadel to say a prayer for him. Major Hunt put his arm on the new Archbishop's shoulder and prayed for God to bless him at the start of his ministry in the Midlands.

Canon Patrick Browne, Administrator of St Chad's Cathedral, and his staff had worked tirelessly to ensure that as many people as possible were able to take part in the Mass of Installation.

The visit to the Salvation Army Citadel was a deeply poignant ecumenical moment that enhanced a moving and inspirational occasion in the life of the Archdiocese of Birmingham, now home to Archbishop Bernard Longley, the music loving lad from Manchester! 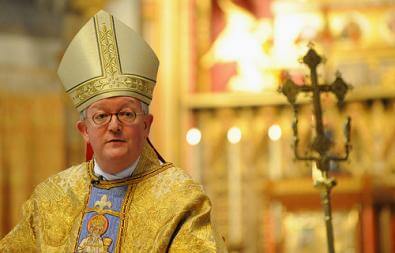