800 Years of the Dominicans

Yesterday the Order of Preachers marked the eight-hundredth anniversary year of its foundation with a celebration of Vespers in Westminster Cathedral, at which Fr Daniel and Fr Richard were very pleased to be present. 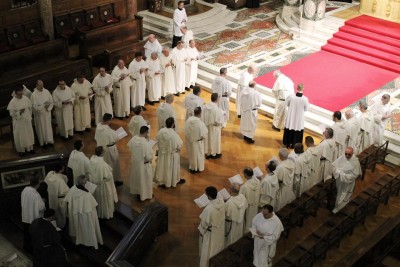 The Cardinal Archbishop of Westminster presided, and the Archbishop of Liverpool, the Most Reverend Malcolm McMahon, O.P., preached.

The Oratory has much to be thankful to the Dominicans: St Philip said that everything good in him was learnt from the friars at San Marco in Florence. In Rome, he used to take the Dominican novices for picnics, saying, "Eat! It makes me fat to watch you." Philip had the key to the side door of the church of Santa Maria Sopra Minerva, so that he and his followers could go into the choir for Compline. It was there that the Forty Hours' Devotion was first introduced to Rome, to pray for a favourable judgement on the writings of Fra' Girolamo Savanarola, whose portrait hung in Philip's room, with a  halo drawn by the saint himself. During the exposition of the Blessed Sacrament at the Minerva, Philip went into an ecstasy and declared that the Pope had ruled in the Dominicans' favour, at the very time when this decision was later discovered to have been made. 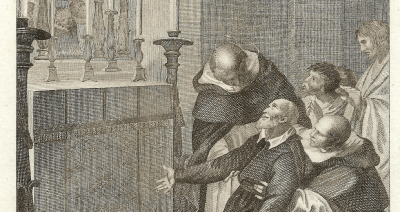 Many of our own community have benefited from a Dominican education, and we pray that our brethren at Blackfriars, and the whole Order of Preachers, may continue to flourish for the next eight-hundred years.